Know the life of Lord Buddha before walking on Buddhist Pilgrimage 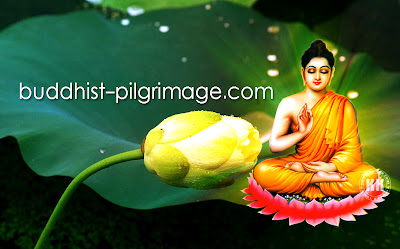 The life of Lord Buddha is a lesson for all of us. Born as a prince 2,600 years ago, his life depicted the struggles we face even today. But he rose above all odds and became the awakened Buddha. But there’s more to his life than we all know. Post enlightenment, he uplifted many souls and ordained them into Buddhism.

His life is a long text book based on travel. In the pursuit of the ultimate truth and knowledge, he renounced his kingdom comforts at Kapilvastu and wandered as an austere monk for the next six years in the search of the awakening. But he didn’t get his goal.
Therefore, the frail prince sat on a meditation with a determination - to receive an answer and ultimate knowledge to all his questions in life. Until that, he will not leave the meditation. All his fellow monks left him along the banks of Nairanjana River near Uruvela village and the prince selected a Banyan Tree for meditation. This meditative trance continued for 49 days and on the full moon night of Vaishakha in 521 B.C., the prince conquered his ignorance and became Buddha in Bodhgaya. The tree under which the Lord achieved the feat over his desires became the revered Bodhi tree.
Many travellers begin Bodhgaya pilgrimage with a same hope to gain the answers to the ignorance, just like the master and sit under the Bodhi to gain the same spiritual setting, like the Buddha. Also, they visit the sites where Lord spent the next seven weeks after enlightenment. The Animesh Lochana Chaitya Stupa, Chankramana, Muchalinda Lake in the present day Mahabodhi Temple Complex in Bodhgaya illustrate the lords’ presence.
The next prominent destination in the life of Buddha was Deer Park or Mulagandhakutivihara where Buddha after enlightenment preached the first sermon of Dharmachakrapravartana to the five ascetics. These were the same ascetics who prior to awakening left the lord isolated in the forest. Eventually, they became his first disciples. The site where this event occurred is presently known as the prominent Buddhist pilgrimage site, Sarnath in Uttar Pradesh. Here only Buddhism or following Gautama Buddha started.
Here, a pilgrim can pay respects to the two stupas and even can discover the roots to India’s national emblem, Lion Capital on an Ashokan Pillar in Sarnath Museum. The Buddhist pilgrimage site is 13 km away from Varanasi.
From there, the lord travelled as with his followers, took refuge in the numerous towns and monasteries at Jetavana (Sravasti), Rajagriha (Rajgir), Sankasia, Vaishali. These sites also became witness to lord’s prime suttas or discourses.
At the age of 80, in 486 BC, the lord spent his last rainy season in Vaishali. Here, he had his last meal from metalsmith, Chunda after which he fell ill. He asked the host to bury the food and announced his Mahaparinirvana. In this poor health, he with his followers moved towards Kushinara or Kushinagar. Here, the lord preached his last sermon of Mahaparinibbana Sutta where he asked his followers to visit the four important places in the journey of his life – Lumbini (birth), Bodhgaya (enlightenment), Sarnath (first sermon) and Kushinagar (final parinirvana). On the Vaishaka full moon day, the lord attained the Mahaparinirvana.
It can be considered contrasting that the Lord was born on the same day in the forests of Lumbini.  Presently, this site of Lord’s birth is there in Nepal, attracting a lot of pilgrims who seek inspiration and lesson from the life of the awakened one.
These four Buddhist sites have a strong association with Lord Buddha’s life. On these sacred sites, Tathagata not he not just changed his destiny, but delivered millions from the cycle of birth and death.


The trend still continues where millions of followers visit the Buddhist-Pilgrimage every year to seek inspiration and lesson from the life of the spiritual master. This blissful journey traces the footprints of the enlightened one and introduces the pilgrims to the sacred spiritual essence of the religion. To know more about this enlightening doctrine.
Posted by Incredible India Tour at 03:00